Here is an example of an exciting case involving a vomiting cat that we recently saw at Heartwood Animal Hospital:

Indigo is a lovely young adult domestic shorthair cat. For as long as her owners could remember, she would frequently vomit after meals. This seemed normal for Indigo, as she has always done this and seemed otherwise quite healthy in every way. One day, Indigo’s owners noticed that she vomited about 10 times within a 24 hour period. Despite having a good appetite and energy level, Indigo’s owners knew that it was absolutely not normal for a pet to vomit so many times within 24 hours, so they brought Indigo in to see a doctor at Heartwood Animal Hospital. 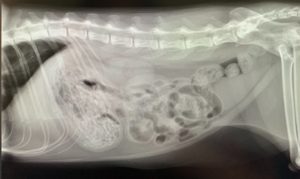 After performing a thorough exam and discussing Indigo’s history and possible exposures with her owners, a diagnostic plan including blood work and abdominal radiographs were determined the best next steps to look into reasons that Indigo had been vomiting so frequently. Indigo’s blood work had some electrolyte abnormalities due to the vomiting. Her radiographs showed the reason why. 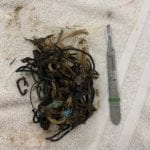 After a night in the hospital on IV fluids and care, Indigo was discharged for the remainder of her recovery in her own home. Indigo’s owners reported that her chronic vomiting stopped after surgery. Turns out, Indigo has been hoarding her stomach full of hair ties and string for longer than anyone ever knew! Now Indigos’s owners work diligently to be sure they leave all string-like material packed away out of Indigo’s reach. 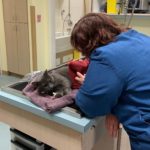 We are so happy that Indigo’s owners brought her in for care before the hair ties caused any significant damage within the intestinal tract. This allowed for a rapid recovery and good prognosis for Indigo’s case.

The moral of the story is that vomiting is not normal. If you have a pet that vomits frequently, please feel free to contact our medical team at Heartwood Animal Hospital for an exam and work up as necessary so that we can help keep your pet as healthy as possible!

About the Author: Heartwood Animal Hospital